First-time buyers are emerging back into the market after recording a fall in share of sales from their 2018 high, in the wake of 2020’s pandemic-led credit squeeze. As lenders withdrew 90%+ loan-to-value mortgages attempting to de-risk at the onset of the recession, many first-time buyers were forced to put their plans to buy on hold.

Price growth at a country and regional level ranges from 2.8% in London to 5.5% in the North West of England and 5.6% in Wales. Meanwhile Manchester and Liverpool are the cities registering the strongest price rises, with annual house price growth of 6.3% and 6.8% respectively.

Demand for housing still ahead of last year

Buyer demand has remained strong through the first six weeks of 2021. It is up 12.4% compared to the same point last year - when demand rebounded after the General Election result in December 2019.

The flow of new buyers comes despite the imminent ending of the stamp duty holiday. Robust levels of demand signals the continuation of a trend that we have highlighted since the summer last year.

While stamp duty has prompted higher levels of activity, there is still a cohort of buyers and movers who are looking for a new home after a reassessment of how and where they are living after repeated lockdowns, and the rise of working from home. The data points towards a ‘search for space’ among some buyers.

As demand remains high, the number of homes being listed for sale is not keeping pace, putting sustained upward pressure on pricing. There are two reasons why new supply is currently constrained.

As we highlighted at the start of the year, some sellers are pressing pause on inviting potential buyers into their homes for viewings during the current lockdown. We expect the flow of new supply to speed up once lockdowns ease.

The data also signals a second factor emerging; increased demand from first-time buyers who have no property to sell when they move.

The mismatch between supply and demand is still evident in most regions across the country, as shown in the chart below. Demand levels in the North East are running more than 40% higher so far this year than over the same period last year, while new supply has shrunk.

The exception is London, where demand levels have fallen year-on-year. However, there is a caveat here. Demand levels in London may be down 17% on an annual basis, but this is compared to a period in 2020 when there was a major surge in activity after the election result in December 2019 with activity levels rising off a relatively lower base.

If we compare current London demand figures to previous years, they are still well ahead of the average. Supply in London is also not as constrained as other markets, reflecting a higher proportion of landlords selling their property.

Last year, amid a squeeze on mortgage availability for those with smaller deposits, we saw the share of first-time buyers fall to the lowest level in four years.

Those buying with a mortgage made up the largest share of activity, while there was a sharp rise in those buying in a cash transaction - signalling rising activity among homeowners using equity to make their next move.

As we move into 2021 however, there are signs of increasing activity among first-time buyers. Our data shows that buyer demand from first-time buyers across the UK is up 5% in the first six weeks of the year compared to Q4.

This chimes with an increased array of mortgages available for those with only a 5% or 10% deposit. While mortgage lending levels in this sector are not nearly back to where they were in early 2020, the number of lenders offering such deals has risen since Q4 last year.

Buyers of lower-value properties tend to be more reliant on the availability of mortgage finance, especially at higher loan-to-values, and the return of activity in these price bands suggests a return to the market of purchasers who struggled to get finance in 2020.

Are some landlords looking to take gains?

Many first-time buyers will be entering the sales market from the rental market. And we are seeing some supply coming from this sector as landlords put homes up for sale.

Landlords are reassessing their portfolios for several reasons. Firstly, there has been increasing discussion about a potential rise in capital gains tax for those selling additional properties.

The Government asked the Office of Tax Simplification (OTS) to examine capital gains tax in summer last year, and the OTS reported its findings in November.

This may be prompting some landlords to crystallise capital gains before any new rules might be implemented. There is widespread speculation capital gains tax changes could be implemented as part of a wider post-COVID package in the Budget on March 3rd.

Secondly, some landlords are reacting to current conditions in the rental market with negative pressure on rents in some city centres.

Finally, the more buoyant sales market may be prompting some landlords to take action. This is a material trend given the constrained supply of homes for sale in the market at present.

The data points towards sustained buyer demand throughout Q1 as pent-up activity among first-time buyers is released amid a noticeable step up in availability of low-deposit mortgage finance.

The ‘search for space’ among existing homeowners is set to continue, especially in light of the current sustained lockdown. Sales are still being driven by homeowners deciding that they want to live in a larger home, or a home with more outside space.

Others are being motivated by the opportunity to live in a different location due to the rise in working from home. Although offices will re-open when COVID-19 restrictions allow, the pendulum is unlikely to swing fully back to 5-days a week in the office for all UK office-based workers.

As the vaccine roll-out continues to gather momentum, and COVID-19 cases start to recede, we also expect more demand from the sellers who have currently pressed pause on inviting buyers into their homes.

Increased confidence around the UK’s response to the pandemic, and opening up of the economy, will likely mean a resumption of activity among these sellers.

This in turn will create additional demand as they start to plan their next move. All of these factors will support activity into the middle of 2021. We still expect house price growth to ease as we move through H2 in more challenging economic conditions, ending the year at +1%. 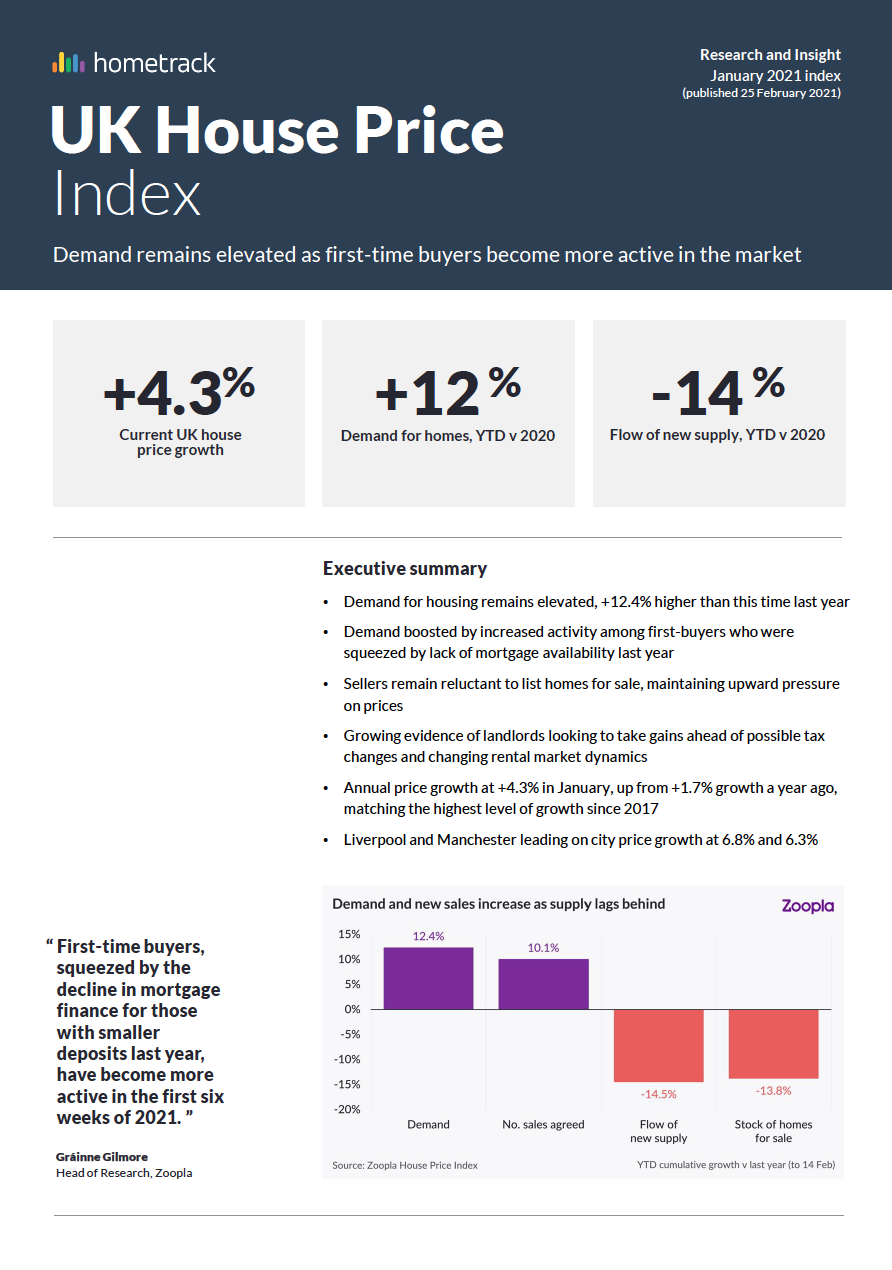 The third national lockdown has created a perfect storm for the property market, with a slowdown in the flow of new supply for sale as demand rebounds.

Housing market activity has come full circle in 2020 and will end on a high, despite the two month+ UK market closure borne of the pandemic.

The first quarter of 2021 is set to record a property uplift, with 100,000 additional sales expected to complete before the end of March. As buyers rush to beat the stamp duty deadline, the increased transaction pipeline from the final months of 2020 will spill over into the new year.