The impact of the pandemic has further to run. The current momentum in the market will largely offset growing headwinds over 2022 with average UK house prices increasing by 3% and 1.2m sales.

Record year for sales and prices - no cliff edge

Welcome to the annual forecast edition of our House Price Index Report. The housing market has certainly outperformed our forecasts from a year ago.

It is set to record the strongest year for sales and house price inflation since 2007 with £473bn of new sales agreed in 2021, £95bn higher than 2020. This is a result of the ongoing national re-evaluation of housing, low mortgage rates and the additional boost from the extended stamp duty holiday.

The strength of market conditions are not a result of the stamp duty holiday alone and greater forces are shaping the market. This is evidenced by the fact that there has been no sign of any cliff edge in demand for homes which continues to run 25-30% above the 5-year average since the summer.

Demand looks set to end the year more strongly than last year and we expect this to carry into 2022. UK house price growth is currently running at 6.6% with all countries and regions of the UK registering growth rates well ahead of the 5-year annual average.

London is registering the lowest rate of price inflation (2.3%) and is the only regions where growth is below the 5-year average with demand for homes in the capital hit hardest by the pandemic.

Clear evidence of a slowdown in rate of price inflation

Demand for homes has not been uniform over the last 18 months. Our analysis shows that the mix of home buyers, and pricing of homes sold, has shifted markedly over this time.

The mix of buyers is starting to return to normal as the economy re-opens and mortgage availability improves.

However, there is clear evidence of slower growth in the value of homes where new sales are being agreed. This marks a turning point for house price growth with a moderation in the rate of price inflation is likely in Q4 and as we move into 2022.

Looking ahead into 2022, the outlook for price inflation and overall sales volumes is a balance of positive and negative influences.

On the positive side, housing remains affordable in many markets and competition amongst lenders will remain intense, even if mortgage rates increase.

A continued scarcity of homes for sale will remain well into 2022 in our view, supporting headline price inflation.

In addition, our analysis shows that the impact of the pandemic on home buying decisions has further to run. This will be supported by the scale of the financial gains homeowners have seen in the value of their homes since 2020 which will bring sellers into the market.

The main headwinds will come from increases in the cost of living, higher levels of inflation and tax increases in 2023. A modest rise in mortgage rates is likely in 2022 and will impact household buying power.

The main market related challenges stem from unrealistic expectations on pricing on the part of new sellers and a lack of homes putting off new entrants both of which are lower risk in 2022.

The affordability of housing is important but no guarantee of activity and rising prices. In many parts of the UK housing remains affordable by historic standards.

The regions and countries with the highest growth rates are the most affordable - measured by the house price to earnings ratio. We believe there is headroom for further, above average house price inflation in regions outside southern England.

However, while affordability levels have improved by 10% in London since 2016, affordability remains well above the long run average – this will continue to limit level of price rises in the highest value areas of London and southern England in 2022 and beyond.

Pandemic impact on market has further to run

It is now clear that the impact of a global pandemic on the UK housing market was not going to be short lived.

We believe the impact of the pandemic has further to run into 2022, supporting market activity and sales volumes. The primary catalysts will be an ongoing re-evaluation of housing needs, increased housing equity and moves in parts of the labour force to more hybrid working.

Zoopla research recently conducted a nationally representative survey of UK households which found that 22% remain ‘eager’ or ‘very eager’ to move home in the next 18 months as a direct result of the pandemic.

It is important not to overstate the impact of the pandemic, however. The same survey found 60% stating no change at all in their motivations to move which is not surprising.

The survey revealed a clear split in the desire to move between younger households and growing families and older, more established households who are settled in their current home.

In addition, those eager to move tend to be located in city, suburban and large towns and those households who expect changes in their working patterns.

The primary motivation of those eager to move was their current home not being suited to their requirements (46%). This was followed by personal motivations e.g. to be nearer friends and family (28%) and finally expectations of changes in working patterns (18%).

With full-scale national lockdowns seemingly behind us, the shift to more hybrid working for many office workers is likely to be a key catalyst of housing decisions and choices as we move into 2022.

After a record year for sales in 2021 we expect UK housing transactions to decline by 20% to 1.2m in 2022. This is in line with the long run average but still relatively high compared to sales volumes over the last decade.

We do not see any important regional or country variations with sales tending to track in line with the national average.

Low mortgage rates have become an important feature of the housing market over the last decade and a support for higher house prices.

It is important to note, however, that the regulation of mortgage lending from 2014 onwards, has stopped lower borrowing costs from creating an unsustainable boom in house prices.

The market is better insulated from higher mortgage rates than in the past but not immune.

The consensus among economists is that interest rates will increase over the coming year as central banks scale back on support for the economy and look to normalise interest rates and manage inflation.

Our projections assume mortgage rates will reach 3% by the end of 2022 - the highest level since 2015 but still low by historical standards.

There are two aspects to consider with higher mortgage rates - first, how they impact new buyer demand and second, the impact on the existing 11m mortgaged home owners.

Any increase in borrowing costs will impact the buying power of new purchasers but this all depends upon how much rates increase. Our analysis suggests that an increase in mortgage rates to 3% will not have a major impact on the price buyers could pay for homes but any increase in rates could deter some would-be buyers and impact sales.

Existing borrowers have more protection from higher mortgage rates. Over 80% of outstanding mortgages are on fixed rated rates, many for 5 years or more. Furthermore, all new borrowers since 2014 have had to prove to the lender that they can afford a mortgage rate of up to 7%, which provides additional resilience for existing borrowers.

Nationally we expect average house prices to increase by 3%, down from an annual growth rate of 6% at the end of 2021.

The upward momentum in prices over 2020 and 2021 has been created by the initial impact of the pandemic and artificial stamp duty holiday deadlines over 2021 - factors that will not repeat themselves in 2022.

Together with our expectation of a modest increase in mortgage rates, we believe the net result will be a moderation in the rate of growth to more sustainable levels.

Any national average will always have a variation at sector and geographical level. Today, house prices are rising by over 10% per annum in northern towns such as Blackburn and Rochdale while price growth remains marginally negative in most central London boroughs.

The growth rate between flats and houses has widened over 2021 and we expect the rate of price inflation for flats to remain weaker over 2022 as buyers continue to prioritise space.

At a region and country level, we expect house prices to continue to increase at an above average rate in regional housing markets over 2022, albeit at a slower pace than currently.

The fastest growing markets are expected to be the North West (4%) and Wales (4%) with below average growth of 2% in London where affordability factors will limit growth in the near term.

We remain more cautious on the prospects for London in the very short term where demand for homes and house price growth are lagging the national trends.

There is clear evidence of tightening supply which will support the recovery once we see a stronger rebound in demand. In the near term London looks set to record below average levels of house price growth. 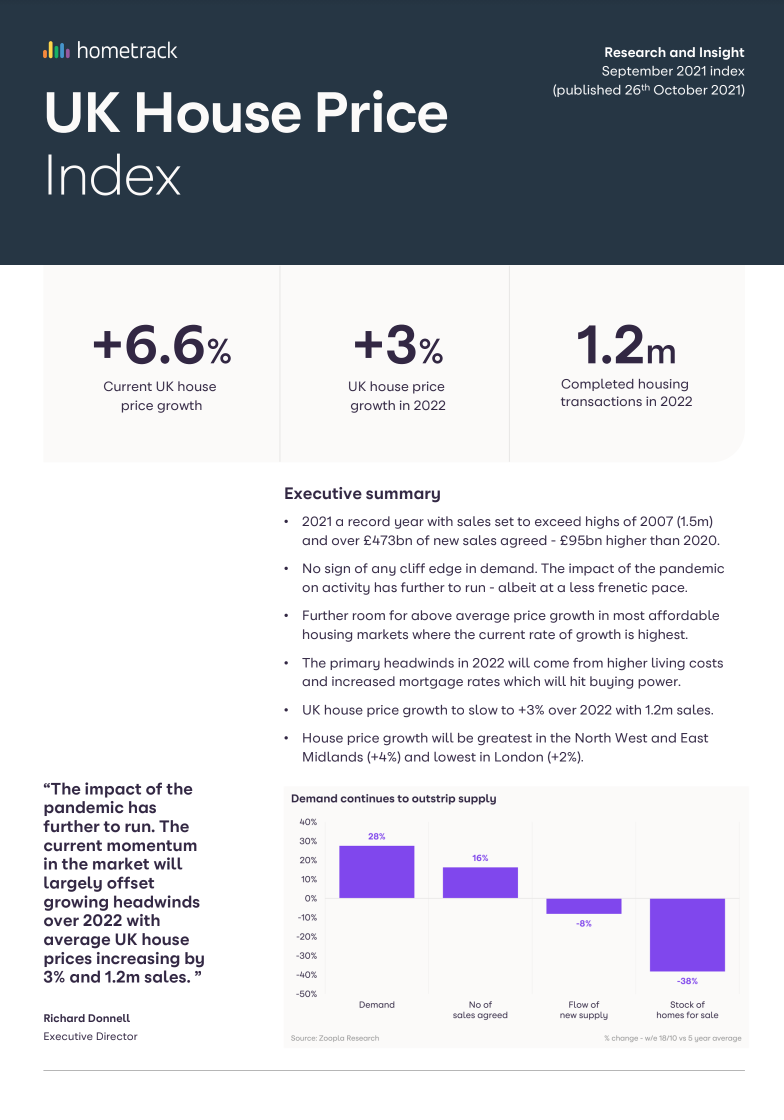 The pandemic ‘search for space’ continues, pushing demand for houses to record highs. Demand is also rising sharply for flats, with international demand, relative affordability and workers flowing back into cities all combining to energise this market.

After a busy start to 2022, the market will start to move back to pre-pandemic conditions, allowing supply pipelines to rebuild. However, the demand/supply imbalance will not fully unwind, and this will be one factor supporting price growth of 3% next year.

House price growth is starting to ease, although the path over the next year will not be linear. We expect UK average price growth to end 2022 firmly in positive territory at 3%.

Demand from buyers searching for space, and making lifestyle changes after consecutive lockdowns, has further to run. Balancing this however, will be the more challenging economic environment as we move into Q4.